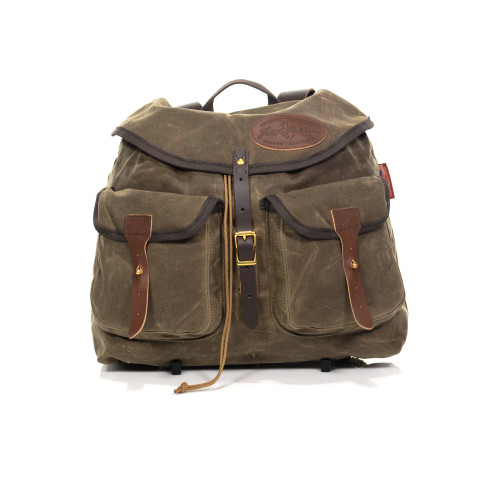 Roaming the North Country in search of Iron Ore can lead an intrepid young geologist into all sorts of adventure. James Byron Hustad was known as J.B.H. had explored Minnesota’s Iron Range in search of underground deposits for U.S. Steel in the middle of the last century. Equipped with his trusty “rucksack” he would often travel by canoe or float plane into secluded roadless areas. Our Geologist Daypack is modeled after the pack that J.B.H. carried on many of his explorations in the U.S. and Canada, Brazil and Africa. He often basecamped for weeks during the summer, and was sometimes dropped off to explore uncharted claims. He lived a life of exploration, self reliance, and survival that any adventurer could envy. Our Geologist Pack is modeled after the classic knapsack design of a drawstring topped main compartment with a flap cover. We've added more volume over the knapsack, plus rugged bridle leather shoulder straps and brass Sam Brown Post quick released front pockets. As with everything we make, it's built by hand from waxed canvas, premium leather and solid brass hardware and is backed by our lifetime guarantee.

Related Products Check out the goods other folks found interesting.

A pack liner is a big, heavyweight, plastic bag used to ensure a watertight pack while on a canoe trip. Yes, waxed canvas is water resistant, and no, not everyone always uses a pack liner. We include...

Made by hand in New England, our pack baskets are built the way they should be: durable and reliable. The Large 20" version is a big basket great for hauling bulky items. Use it on its own, with the...

Built like a canoe pack but shrunk way down, The Book Packs offer heritage, utility, and function reduced to a miniature size. Just don't call them cute. They are tough, reliable, and secure-- but...

“so·journ noun : a period of time when you stay in a place as a traveler or guest” - Merriam-Webster Dictionary seems to indicate that if a temporary stay has you carrying stuff along, you could...

Related Products Check out the goods other folks found interesting.

Bushcraft-- wilderness self reliance skills— the ability to not only survive, but thrive for extended periods in the woods. For some, it can take a lot of gear to thrive, for others, all they...

The Summit series of packs are based on the traditional knapsack. It's a classic and enduring design that works. Our Summit Expedition goes a step further with upgraded pockets, external lash points,...

Historically one of our most popular backpacks. And it does have history. It is a reproduction of writer George Washington Sears' (a.k.a Nessmuk's) old Maine guide pack from the 1880's. Popular for...

Do nothing in haste, wrote Edward Whymper after his first ascent of the Matterhorn in 1868, look well to each step; and from the beginning think what may be the end. We took Mr. Whymper’s words...

https://vimeo.com/77247856 This box style canoe pack is designed with help from outdoor writer, wilderness traveler, and Eagle Scout, Cliff Jacobson and laid out with helpful features designed to...

An expertly crafted rucksack to wear on your back and haul the stuff that needs to be carried. A backpack with padded waxed canvas shoulder straps attached to a solid brass ring–what more do...

O. Henry says that "the true adventurer goes forth aimless and uncalculating to meet and greet unknown fate." This is a great pack to grab when you're heading out to meet & greet an unknown fate,...

“so·journ noun : a period of time when you stay in a place as a traveler or guest” - Merriam-Webster Dictionary seems to indicate that if a temporary stay has you carrying...

Compression is the key to the Boulder Junction Pack. It’s a fairly tall pack that holds a lot and really benefits from the cinched sides that the brass rings and laced cord provide. We got...